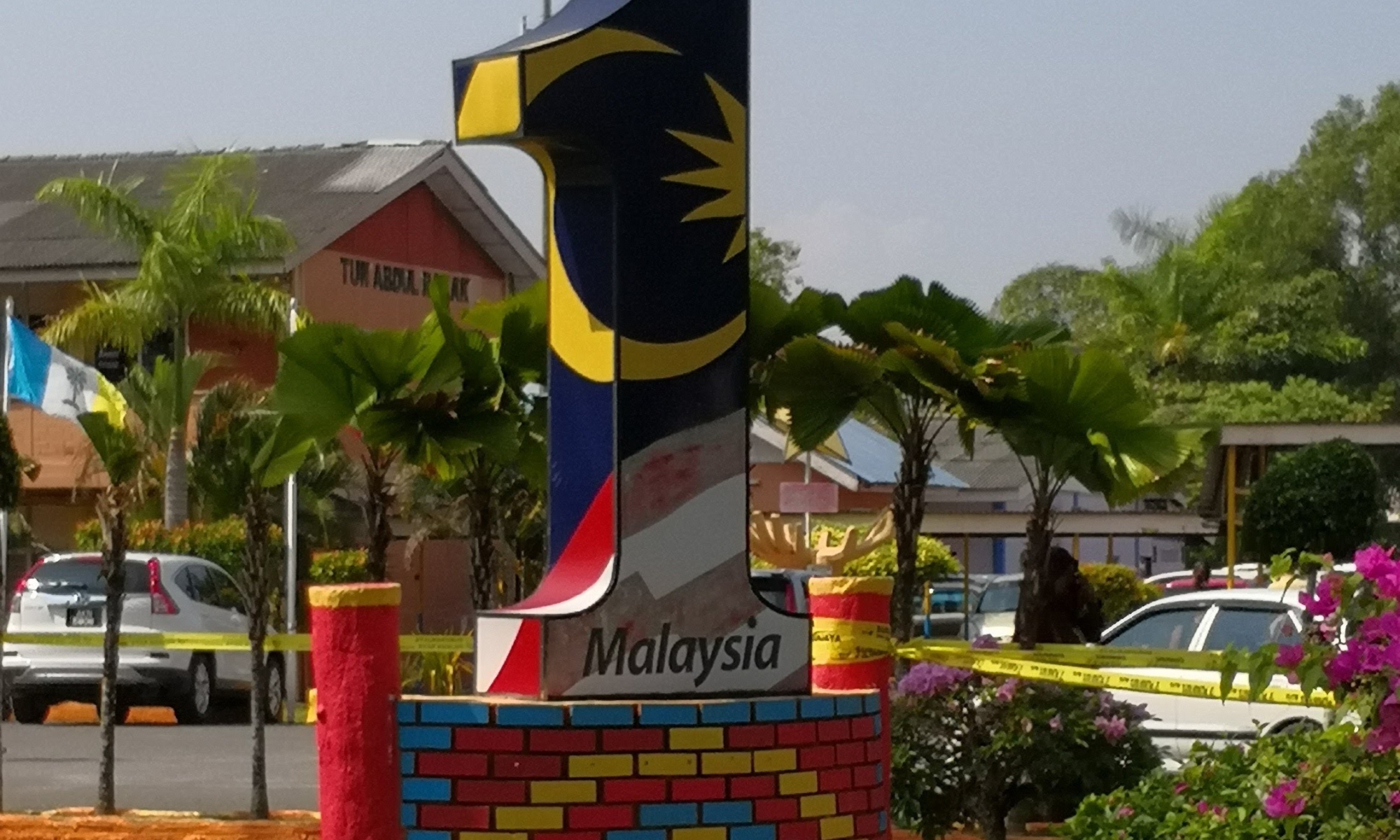 The finale of the 14th General Elections (GE14) in Malaysia are Epic. There simply is no other word than epic to describe the course of these elections. It teaches that voting matters. It teaches that your right to influence your country absolutely is possible. In Malaysia, after about a 60 year rule of the leading coalition, Malaysians voted the opposition in power.

This article will take you through the final hours of these elections, giving in-depth background information about politics with its different concepts, and how I experienced the GE14 in Malaysia.

What politics is and why it is far from boring

What I first would like to point out is that everything we do, say, utter, discuss, talk about with friends and family or at work and at clubs, is political. All the so-called opinions we continuously vomit on social media, in essence, always is political too.

Thus, a random type of meme can become influential if it’s viral enough. Ultimately it will represent a consideration or something that is ‘happening’ in society. Politics will react on that by using that sentiment in their arguments.

A classic example is that President Trump shared Tweets from an ultra-nationalist group from the UK that Tweeted fake anti-Muslim rhetoric. That was unprecedented and condemned all over the world from all different kinds of political parties. However, it does show what is alive in certain groups in society and how influential you can be when you share (fake) news!

Also, at which shop you do your groceries, for example, is influential. Do you shop at Tesco, a foreign corporation, or do you shop local to support the local communities so wealth stays in a country? Ultimately, when the society chooses to shop at international corporations, we want them to come and we want to have it attractive for them to stay, thus political parties will sense that and react on that.

Which is opposed by other political parties who are against the meddling of big international business and focus on the what the best interest for the society is and it easily can be that they strive for ‘protectionism‘.

In this light, does voting matter?

Absolutely! Your vote matters! Societies’ day to day choices, or the shift of how we choose to live our lives don’t create sudden landslides. A periodic direct influence does and that’s through voting.

Malaysia needed to wait about 60 years for it but last night. you. made. it. happen. The 9th of May is a day for Malaysia to remember.

Why waiting 60 years? Was there a dictatorship?

No. Not at all. However, one of the former prime ministers of Malaysia, “Dr. M” as they call him was PM between 1981 and 2003 when he retired. Political opponents call that ‘dictatorship’ because one man is in power for that long time even though there were regular elections. Malaysia is peaceful, didn’t fall apart because of racial tensions and all ethnic groups live relative tension-free, side by side in the same country.

However, I do experience a resemblance with the USA, both in polarization and political structures/behaviors. In both Malaysia and the USA there is the difference between the state and the federal government. The head of state in the USA is presidential and in Malaysia it is a revolving monarch.

Each state is lead by a sultan and those sultans share power by rotating being the head of the federal state every now and then. I know this is not totally accurate – just a simplification of the system. Governors in the USA are head of- and represent their state at federal level.

In the USA it is simple, there are the Democrats and the Republicans and they change leadership among them every 4 or 8 years. Not that much of a choice.

In Malaysia there is a multi party system. There is only one HUGE no HUGE note to make that historically influenced every election outcome to the benefit of the leading party:

In a democratic country ruling as such is not about the person or about a specific party or coalition of parties. In a democratic country it is all about bureaucracy instead. Bureaucracy is the management of administration. It is the departments and the ministries which are bound by policies, rules and regulations. It does not matter who is managing them, they just need to be managed by any official who is loyal to the constitution (versus loyal to a king or president or other authority) and performs his/her duty accordingly.

When the society disagrees with a set of policies then, at the next elections, a different breath of air can freshen up the administration so the country moves to a different direction.

People vote on parties they feel representing them. In other words:

In Malaysia, however, the government chooses its people to stay in power.

Barisan National (or BN) means National Front. However, BN is not a political party! Well, yes it officially is but in reality it is a coalition of 13 different parties (!!!) Then there are 9 more parties, the opposition, who can be voted in parliament. PAS is the biggest opposition party and is the most religious party of all. They used to be part of BN but are now independently contesting. On state level they are now the biggest in the most north eastern states.

Just looking at these numbers, even if all the rest of the elections are fair, BN always would win as the opposition didn’t form a coalition and contested together under a new name.

Electoral maps look very odd as it crosses neighborhoods and adds different administrative districts together to be sure the government stays in power, also if they lose the popular vote.

Towards A New Malaysia wrote more about it before the last elections, GE13, and this year it was no different.

According The Economist: “Malapportionment—the creation of seats of wildly unequal size—worries critics most. This involves packing urban and minority voters, who tend to support the opposition, into highly populated constituencies (electoral districts), while the largely rural and Malay backers of the Barisan Nasional occupy depopulated provincial seats. As a result, it takes more votes to get an opposition MP elected than it does to elect one from the ruling party.” – Economist (2018)

Thus, for the opposition to win, they do need a disproportional high amount of absolute votes to overcome the difference in that district’s size. That implies that the weight of an opposition vote is much lower than in a small sized election district.

The law states that electoral districts need to be more or less the same size. In the early days after independence, the difference in size could only be 15%, in 1962 it increased to 33% and in 1973 *poof!* no limit in size difference at all.

Why is the Malaysian GE14 so Epic and exciting?

Because despite all the gerrymandering and all the malapportionment, BN lost both the popular vote, again, and also the simple majority in parliament, thus they cannot form a government and will be the new opposition.

It is a huge defeat, an embarrassment, and they have serious wounds to lick.

I only could follow the election news in part – what can I know about Malaysian politics in only a month or so? Not much.

But the result is that there are that many more people who have voted for the opposition, so the gerrymandering and malapportionment could not keept BN in power.

Why did that happen?

There are several reasons. I do want to emphasize, however, that I am writing as an outsider who looks at the issue with foreign eyes and analyze differently than a Malaysian would do.

It is difficult to rely on the media. The campaign of both BN and the opposition has been ugly with sneers back and forth and promises that can soon become “promises” to attract voters.

Dr. M, or Tun Mahathir Bin Mohamad, 93, was the longest sitting PM in Malaysia. He was in power from 1981 till 2003. At that time he was leading BN, which he supported all the way till these elections.

Everyone knows Dr. M. The majority of the people had him as PM, and saw Malaysia grow from a poor agricultural country to what it is today. It was Dr.M who envisioned Malaysia to be a developed/industrialized country by 2020. I am not sure if the international community will recognize that in about 1,5 years, but, surely a lot of progress has been made.

Under his rule the urban areas improved big time and the whole of Klang Valley is proof of that including the twin towers in Kuala Lumpur.

Rural areas have been developed as well. Pro-poor policies have been implemented to help rice farmers and 650.000 people got 10 acres of land for palm oil field development.

The industrial sector got a boost and Malaysia is now a heavy player in tech-industry, specifically in producing semi-conductors.

Under his rule and bold decisions Malaysia didn’t suffer that much and that long from the technology crisis in 1998. Read more about that here

Of course Dr.M wasn’t perfect. Of course he widely did this gerrymandering and all the other tactics because it benefited him. Of course he is not scandal proof (at all). Yet, this general development of Malaysia as such did happen under his rule and that works now in his favor.

The current PM, Mr Najib, was Dr. M’s protege and the other protege, Mr Anwar, is locked up for “sodomy”, which, in fact was a political move as he came too fast, too close to Dr.M.

Mr Najib has been ruling for 9 years, but, for reasons unknown to the public he clearly pissed off Dr.M big time. There are several reports in the media as to why, but, as it is sneering back and forth I cannot see clarity in it.

Fact is that Dr.M returned from retirement. At an age of 93 I don’t believe that it is about power. He took a big gamble to form an alliance with the opposition, to bring them together under 1 name to give at least balance to BN.

That strategy worked. The majority of the Malaysians want new air, want something different than BN. The opposition never had a face and the face they had, Mr. Anwar, is in jail. The opposition has now a new face, or better, an old face. That man who brought Malaysia to what it is now is back supporting the opposition.

The youth, people who can vote now for the first time, they only know BN and are not satisfied with them.

The youth, together with all the other Malaysians, see better fortune with Dr.M and the opposition. A new fresh wind with a familiar face.

That’s why that many people shifted leading the opposition to a narrow simple majority.

My wish for Malaysia

It is a great privilege to be in your country. Slowly I will participate more and more in your society to, then, call it my own too.

I see One Malaysia, One People, and One Future independently who runs the government. I wish you to make the right choices, accept the coming change, with confidence, with unity, in peace.

The power of change is entirely in your own hands and you just have proven that a big change is possible. In such elections there are winners in an euphoric state as well there are people who feel lost and maybe scared for what is coming.

Accept the process of change, even when it is difficult. Keep on talking to each other, set aside differences, different opinions as you will have to move on together. Be in solidarity, shoulder to shoulder building the country to the next level to everyone’s consent.

You can do it, I believe in you.

Thank you for showing me and the world at large that a peaceful transition of power is possible. That gives a big vote of confidence. I stood with you in the same lines, though I couldn’t vote, conquering the heat of the moment. 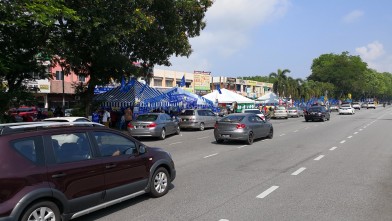 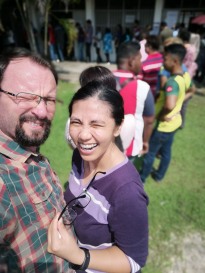 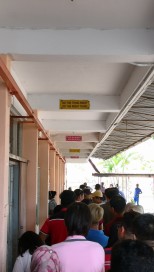 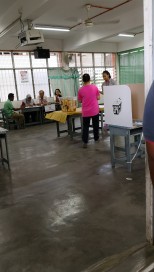 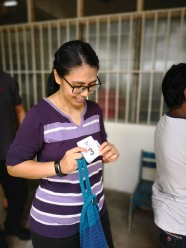 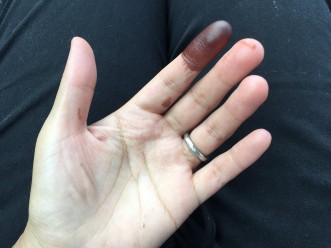