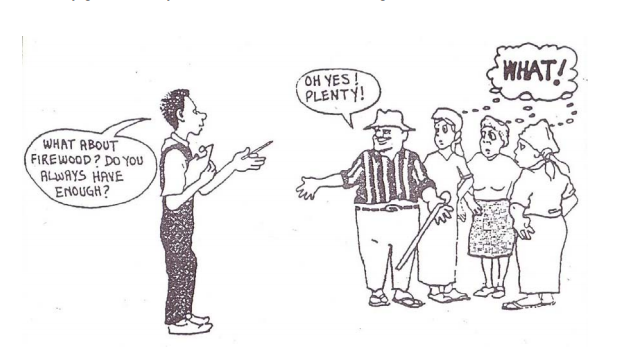 This cartoon, don’t know from who, is in a report I was reading about gender roles, specifically in poorer rural areas where the divide is bigger.

The report is about a male dominated research and approach when it comes to interventions in for example agriculture. Then male researchers ask male villagers about the situation, and by doing so, bypassing and ignoring the other half of humanity:

Hadie and I are nowhere near a position that we need firewood or fetch water, or anything alike, yet, here and in the rest of the world, it all is male dominant.

While women do the hardest job!

Currently I am finishing studies, unable to work due to visa regulations, thus, I am home. I’m studying, gardening, writing, cleaning, cooking, laundry, shopping and watching over the cat. We don’t have real babies, but, if we had then I’d be the one taking care about them too. Obviously, I have time enough that I theoretically squeeze in a paid job as well. This typically is seen as something for women only…. Hell no! Men can do exactly the same!

I cannot not think about a woman we recently met. She was in her early twenties, well educated, spoke English very well, but, was married, thus had to leave her family to take care of her twins in a poorer neighborhood of a fishing village. And had to do the shopping, washing, laundry, etc. She looked pretty bored to me and living far under her true capabilities – poor soul..

I cannot not think about how cultures, forcefully or subtle, differentiate between genders. This regarding to rights, including (re)productive rights, wage-gaps, violence, having to wear a hijab or wearing it out free will, general attitudes and the lot.

Just because men have dicks they don’t have to show them (off) or act like being one!

So this one is for all women, and especially my woman, YOU ROCK!!!!

Unite, empower, and demand your rightful place on this planet and in all societies!

As the concept of work is divided in 3:

If all the hours women are working are considered to be paid to make it economic countable as in the economic benefit to society, then, men….. I’m so sorry… (no I’m not) but we are so insignificant compared to women! Our biological difference never ever can be a justification as compensation to be ‘on top’.

Abrupt and random compliment to all women!

15 Replies to “Women of the planet you rock!!! A random appreciation for all the hard-working women!”