Viva la Paris! Paris, the city of lights, love, the Seine, Louvre and a wealth of history and culture dating back all the way before the Renaissance.

The most famous painters went to Paris to document Paris from all angles in all classic and contemporary styles imaginable. Is there actually a city that is painted more than Paris?

Boats on the river, couples walking hand in hand, or arm in arm, passing by the Opera, giving each other an Insta-famous kiss. Even if you’re still single, surely there is always someone so extraordinary who completely enchants you, makes you feel you are tiptoeing on the highest clouds, dancing above the rain throwing your umbrella in infinity.

In Paris is the metro with their typical entrances, the squeezing of rubber wheels, the typical sound of iron, the smell of piss, Paris, yesssss, you are a magnet attracting people from every corner of the planet!

Paris, near the Eiffel Tower, the souvenirs on a blanket and sellers walking around with miniature towers as key rings. Paris, with its small picturesque streets, typical street signs, number signs, color of the buildings, plants crawling up to show off the most beautiful flowers, the smell of freshly baked bread and the finest coffee with the Notre Dame on the background.

Paris with the périphérique, the infamous ring around the city center literary everyone talks extensively about who crossed Paris going to the south of France.

Paris, magnifique, Liberté, grand allure, and and and and the Japanese embassy who has a 24 hour hotline and repatriation service because Paris is just another big city. No. That is not a joke, though I do think it was funny the first time I heard about it.

I never really enjoy big cities, I always try to avoid flocks of people, but trying to find the smaller gems of life instead. I adore the little restaurant on a corner of a typical street that never lost a bit of its history. I can drive for hours on small roads discovering places, see the beauty of nature, having my feet in the water under a bridge on a sunny day. But. My birthday is in January…

Hadie, my wife, was with me in The Netherlands, you can guess it, yesss! on my birthday even! This was still in the time either of us traveled to each other right before I moved permanently to Malaysia, my new home a month later.

Generally, I sincerely do not like my birthday. I don’t mind getting older though, just how the Dutch are celebrating it, no, that I do not like and I’d like to be as far away as possible around those days. Last year I escaped to Malaysia, this year to Paris.

In a good time I booked an affordable room near one of the main train stations, I bought the train tickets in advance and on the 12th of January we got up early to catch the train from Rotterdam at around 7.00ish am. In no-time we were in downtown Paris, ready to explore the city!

Like any other +6 million people city. However, it does have its charms and I do understand why so many people are going to Paris each year. Paris, whether I like to admit it or not, even for the 3rd time, it had its attractiveness and despite walking several times on the same streets each time I was there, I did find something new to look at. 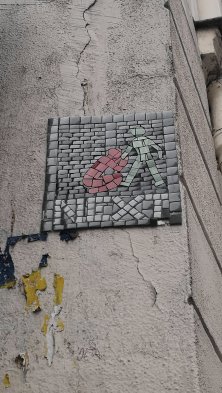 Of course the city is dirty, of course there is the pollution from buses next to the big streets. Of course it is not pleasant walking there, experiencing VW’s ‘dieselgate’ when you’re nearly getting high from all the toxic particles you’re sucking deep in your lungs as you need to speak loud enough to conquer the noise of that same traffic.

Of course the toilets are dirty, especially the “public” toilets, you know, those boxes on the side of the streets? Coin in €2,- door swings open, right after the “just-cleaned-light” went off to find a gigantic pile of rubbish, broken lights, graffiti, shit on the ceiling, condoms and heroine needles? Those toilets? People from the USA call them ‘restrooms’ they even debate which gender can be in what ‘restroom’, well, go to Paris my friends and rest away!

Of course there is a ‘begging children syndicate’. Cute but poor looking girls, pretending to be ‘deaf’, asking for ‘donations’ for a new ‘home’ where they can ‘shelter’. You know that too, right? Those tricks as in putting a map on your hand, or a kind of tabloid with ‘information’ and ‘explanations’ in a bazillion languages why you certainly must give to such a poor little teenage girl. And then realizing that either your phone, passport, or wallet got stolen and if you’re lucky all of them are gone! That nearly happened to me last time I was there, this time it was a big NOOO!! and they got the message, forwarded it through WhatsApp, that they should not bother trying us. (I’m cynical about this one, maybe not justified, as children do need a safe space to grow up and they shouldn’t be begging on the street in the middle of January in the cold and uncomfortable icy wind, and organized begging make it even worse. It’s just that I saw the same girls doing the same thing, twice, in Paris, and that gives the city its ‘other’ attitude.)

….. that is actually looking very nice!….

When you go at the right time being at the right place. We were mainly walking, for hours beside the river, with its used book stalls, colossal huge buildings, the bridges, the greatness, the history that’s still there, somewhere, when you can look through all the ‘of courses’ that every major city has. It has such nice spots to take nice pictures of, both of that spot and of yourself too of course. Of course!

Ile Saint-Louis, that island behind the Notre Dame, the narrow streets, the different buildings, the different colorful shops, bakeries, handicraft and hobby stores. The souvenir spots with endless postcards, the small coffee-shop on a corner. Walking down those streets, zigzagging through them, sniffing the lungs full of the atmosphere, breathing out slowly only to be disturbed by a 2-tact engine of a small motorcycle of which the sound that still echoes in my mind.

The view from its bridges on the river, with the cathedral on the background, yes, those particular streets are unforgettable. This only was January, I’m wondering how it looks like in spring or summer!

Speaking about painters who lived in Paris documenting it, Rue Lepic, home to Van Gogh, was a near eye-gasm! That winding road leading up to Place du Tertre, where there are so many lovely places to eat and where artist still are selling their work. Their art in wonderful colors, a big variety of styles, something modern and fancy but also classic. The portrait drawers, chip in a couple of €, well, €€ it is and 10 min later you walk around with yourself drawn on paper for life.

This, my friends, this, this is Paris! Walking around, dreaming away, imagining how it used to be when Van Gogh still lived in Paris. 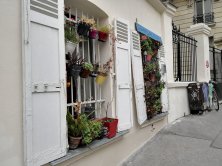 …but, crippled by fear

The weather in northern Europe in January, is exactly that. Gloomy, cold, chilly wind, thick dark clouds covering the skies which gives you the feeling to hide somewhere. Somewhere inside, nice, romantic in a small restaurant eating signature dishes.

Visiting monuments, such as the Eiffel Tower is so much better at night than during the day because the night does give it a very different look. We took the metro to the Arc de Triomphe and walked from there to the Eiffel Tower. We were excited! Sometimes we could see the tower, sometimes not. The lights from the top circling around, the lights of the tower itself, the atmosphere, the attraction, yesss, we could feel that increasing with each step we took closer to the tower.

We arrived from the back side, walked on the steps of Trocadero, turned around and saw the tower from a distance, and? That. view. OMG. On a gloomy night, low hanging clouds, a bit hazy, the tower, with its light, that was simply stunning and the camera couldn’t not take pictures.

We walked down again, closer to the tower, picture after picture to get the perfectest shot ever made, which of course everyone manages to do as there is a whole battery of people on the bridge taking exactly the same picture. 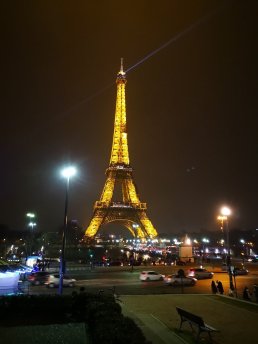 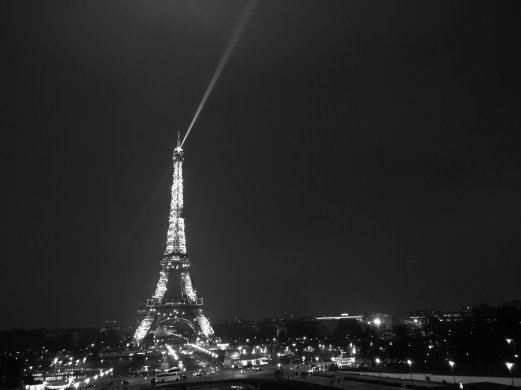 I remembered the tower from last time and it was such a positive experience. People walking hand in hand, music, artist, the keyring sellers, the waiting lines to go on the tower, the free flow laid back atmosphere and people sitting relaxed on the grass or on one of the benches enjoying the moment. I was totally ready showing exactly this picture to Hadie! We came nearer, already could hear music, entertainment and a positive vibe coming our way!

But. All we got was a junction under construction, roadblocks, heavy duty security – it was entering a prison. Security lines, check point, showing bags, no alcohol, no glass, no lighters almost. In front of us was a group of 3 Korean girls who just bought souvenirs for home. Mid-twenties they were and 3 security guards needed to discuss whether they are a threat for public security or not. They had glass in one of the bags…. *rolling eyes* *face-palm* as if 3 lovely ladies were wolves in sheep clothes preparing themselves to have a massive attack with souvenirs on an empty square on January 12!

Once on the square, it was empty, no life, no people, no music, no food, no atmosphere. My dominant memory of Paris will be its fear for terrorism and its disproportional measures to stay “safe”. Now it was January, a winter night, so we were inside in 10 minutes; I do not want to know how it is now in spring on the first of May and the rest of tourist season.

We shot a couple of pictures, looked at each other, went through the revolving security door, took the metro, deep in thoughts, hardly spoke till we couldn’t see the tower anymore. 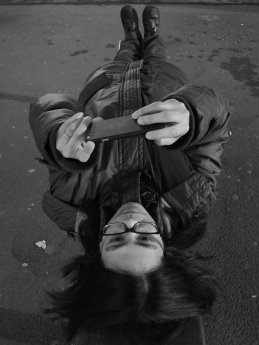 Some random pictures before leaving ‘the Eiffel-Prison’

This was a sobering, putting feet back on the ground Paris-changing experience.

Au Revoir Paris, Au Revoir… You’ve been kind but no, sorry, not again.